Software has the potential to revolutionize the practice, experience, and business of healthcare, but the current generation of systems are more apt to cause frustration among doctors and confusion among patients, than increased efficiency or a better patient experience. 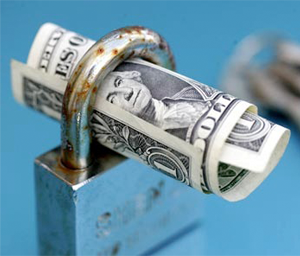 It's no secret that healthcare is one of the largest industries in this country. By some accounts our national health expenditure is expected to hit $3 trillion dollars in 2012, so it's no wonder that investments in Healthcare Information Technology (HIT) are growing at double digit rates, with spending on Electronic Health Records (EHR) projected to hit $3.8 billion by 2015. The explosive growth is driven, in part, by $28.5 Billion in governmental investment and incentive programs which kick in this year. Starting in 2012, switching to EHR opens up $44,000 in incentives for individual physicians (over 5 years), and $2 million as a base payment for hosptials that switch. This will be further compounded by adjustments to Medicare payments in 2015 based on meaningful use of the systems. As a result, hospitals and healthcare providers have had very little choice but to switch, and switch now to EHR. 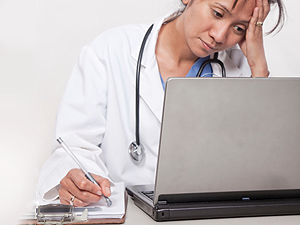 Talk to any doctor about their thoughts on the current state of EHR software, and you're likely to receive colorful, expletive-ridden descriptions about how cumbersome and difficult to use software they are forced to use on a daily basis is, followed by some surreal story of a kafka-esque experience they've had with an IT department or provider trying to convince them that a critical defect is a feature not a dangerous bug (Spoiler alert: I happen to have a father, sister, and soon-to be brother in law who are all physicians, and like all physicians I’ve spoken with, are quite vocal on the subject).

My father, Dr. Val Catanzarite, puts it in perspective:

Instead of looking at the existing workflows, which included both the good, the bad, and the ugly, and attempting to keep the best and improve the worst, IT developers figured that they could cure healthcare’s ills with gigabytes of…text. The EHRs that are supplanting the old paper records are text based, eliminating the problem of handwriting but also losing the functionality of drawings, etc. A checkoff sheet that took less than a minute to complete a year ago might have been replaced with an EHR page that takes 5 to 10 minutes. Touch screens? In your dreams. Speech recognition? Speech what?

Compare the front end of a gigabucks EHR implementation to an iPad and it’s immediately apparent why most EHR implementations result in a huge increase in provider time to document a patient encounter. In the past, a quick checkup might be 15 minutes— 12 minutes face to face doctor and patient time, and 3 minutes to complete a form or write a note. Now, the same visit might require 8-10 minutes to complete the note, that is, if  the EHR is “up”. (EHRs are famous for long lunch breaks, and often like an afternoon nap as well). Even after a year or two after educating the users, fine tuning the systems, etc, the provider productivity typically remains at least 10%, and often over 20%, below baseline.

Keep in mind, Dr. Val Catanzarite is no luddite. It's no wonder many doctors and nurses reflect fondly on the simpler days of paper charts.  The bottom line is, the healthcare software is failing physicians, and it's not the user's fault, these systems appear to have been designed with a sole focus on technical requirements and budgetary constrants, with no consideration for aesthetics or usability. The market seems ripe for a disruptive startup to deliver a product that works and wipe the floor with the competition.

Unfortunately, in the healthcare industry, the costs of switching software platforms are prohibitively high. When considering the costs of switching software systems for a hospital or network of healthcare providers, the actual cost of the software is a relatively small part of overall cost of the system, with the majority of the cost going towards services to customize the implementation and provide ongoing support and maintenance, while additional cost is driven by the need to train staff to be proficient with the software. Lock-in is further compounded by the questionable cross-compatibility of data between systems, which shows little hope of being resolved in the near term. Because of these factors, it's likely that the current generation of HIT software will dominate the industry for the foreseeable future. 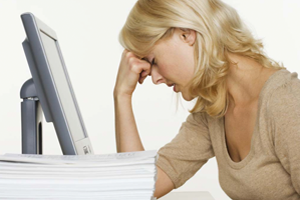 It's not just software for physicians that leaves much to be desired. Examine Kaiser Permanente’s industry leading Health Information Technology (HIT) implementation, showered in prestigious awards and copious praise like the *Stage 7 Award for Excellence* awarded by an organization that has obviously never used the system as a patient, because it's terrible. Yes, Kaiser's system affords access to EHR to 9 million subscribers, but how many can actually figure out how to use it?

As a software product manager, designer, and rabid early adopter, I'd consider myself to be somewhere in the upper 90th percentile in terms of tech-savviness as well as ability to intuit new technologies. That said, I am regularly so confused by Kaiser's online portal that I end up (somewhat embarrassedly) calling their phone system, which is only slightly less awful. The problem is, the system seems to have been designed to comply with some massive set of business requirements mandated to meet the standards of a "viable" EHR, with a total disregard for usability, information architecture, or user experience. It's as if the designer took the bulleted list of requirements and literally translated them to the page. 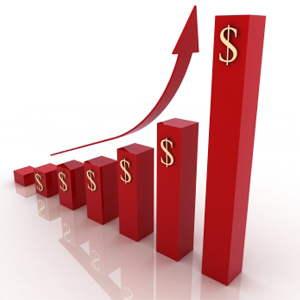 My sister, Dr. Tatiana Catanzarite made the point that the big HIT corporations are “So focused on outbidding the competition for contracts with major hospital systems that there are few resources actually left for innovation.”  Consider Cerner, the second largest HIT provider by market share. 21% of their 2007 operating expenses went to research and development, but the majority of that went towards upgrading legacy systems, and only 3% of their operating revenue actually went towards developing new software. How much of that small slice of the pie went to evolutionary improvements, how much went to real innovation?

The truth is, the revenue growth of most HIT companies is driven by winning contracts with new hospitals and providers networks, not by creating better software. In the first 9 months of 2011, 67% of Cerner’s revenue came from Service, Support, and Maintenance, while only 31% came from software sales. From the perspective of a revenue machine like Cerner, if existing offerings are making a killing, and there is still room for growth, why rock the boat? The the top 25 HIT companies grossed over $26.7 billion in 2010, but an average of just 22% of that revenue came from software. For these companies building better software actually erodes revenues over the short term due to the cost of upgrades for existing contracts and cannabalization of existing products! It’s a classic Innovator’s Dilemma. 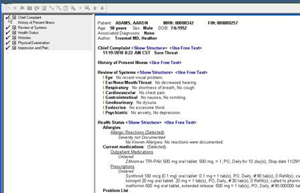 Software has an enormous potential to increase the quality, accessibility, and overall experience of healthcare, but in order to realize the potential, the developers of the software need to re-align their focus on usability, user experience, and innovation, instead of short term revenue growth.

Consider for a moment that the industry leading EHR solutions lack even the a simple feature to allow the doctor to query a set of their own patients around a certain medical condition, or medication, or compare the charts of recently treated patients. The physician has to literally contact the IT department to run queries directly in the database to collect that type of information, and you can forget about reports on really useful stuff like what medications worked best, average number of visits until diagnosis, etc.

There are some very promising startups in the healthcare space, such as dr chrono, Practice Fusion, and One Medical Group, each innovating around one or more of the core problems such as EHR UX, practice management, or digital patient experience, but who will challenge the Goliaths of HIT like Cerner, McKesson, Epic, and Siemens that control the lion's share of the market through integrated solutions and contracts with hospitals and large provider networks?

The reality is, the opportunities for innovation are much, much larger than just building usable systems for doctors and patients to manage electronic health information. There is an entire, virtually unexplored realm of possibility that includes data analysis, pattern recognition, and other forms of intelligence derived from data that is already being collected. 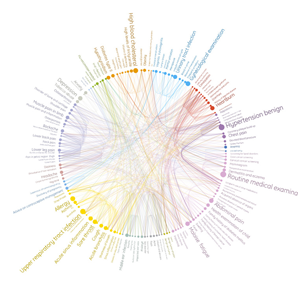 Picture a system in which doctors could not only run queries searching for patterns within their own patients, but could use an intelligent software tool to organically discover previously overlooked patterns or correlations of medical conditions or disease within not just their own patients, but across larger data sets of provider networks, hospitals, or even annonymized data for entire countries or the whole world? What new relationships between conditions, diseases, medications, etc. would we discover if we could harness the power of the data we are already collecting?

In order too realize the true data intelligence potential afforded by electronic health information, there needs to be a centralized, secure, way to share information between organizations. Even if EHR providers were to magically fix all of the problems with their existing software overnight, we would still be no closer to a solution to the fact that the EHR landscape is hopelessly fragmented by data incompatibility and server siloing. A nationwide or worldwide EHR database is a pipe dream today, but standardization would create an enormous amount of value, and will happen eventually, although it certainly won't happen over night.

A paradigm shift looms on the health IT horizon, and it won’t remain a pipe dream forever. Imagine an intelligent EHR system that learns about patients and automatically looks for patterns by matching data points against a massive, centralized database. Imagine a patient experience that makes managing personal health information as simple as Mint.com makes managing financial information. Such system functionalities have been envisioned for decades, and they could literally transform healthcare, but only when a company enters the space that thinks and operates like Netflix, or Intuit, Apple, or Amazon, and my guess is it will be a startup, not an incumbent player.

Lets play a game called: "Guess which link contains the actual details of my health plan." 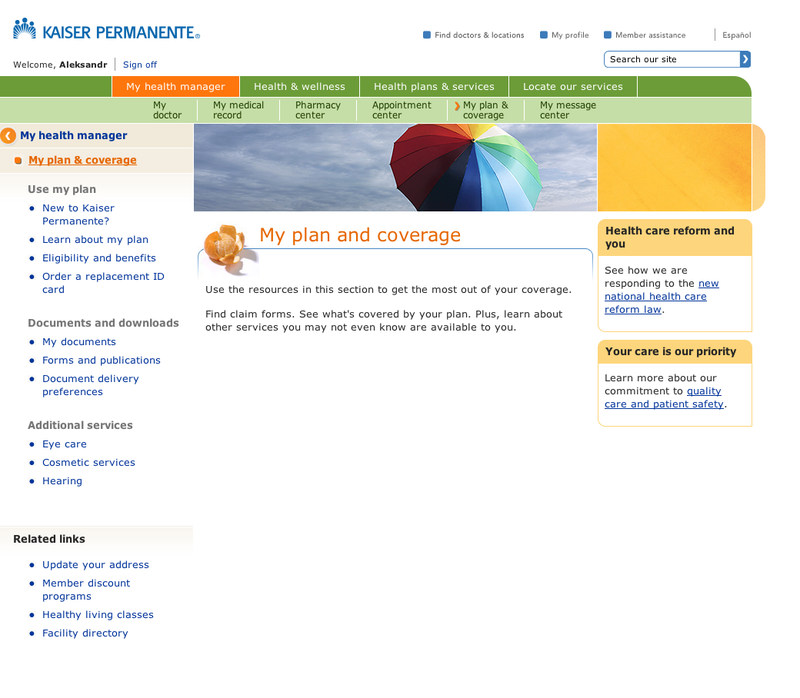 Solving that one took clicking through half a dozen dead end links (some of which literally have no content to display). 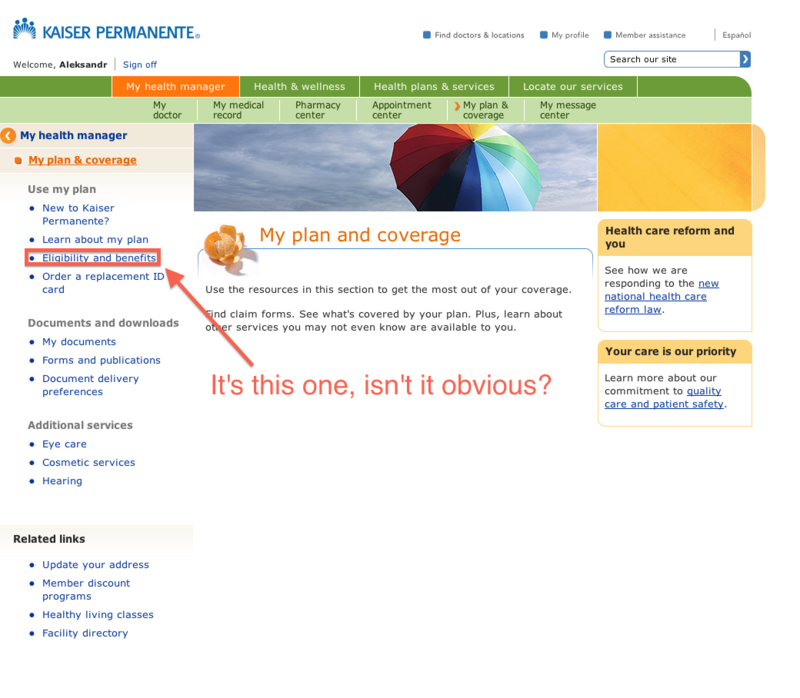 Another fun one came up recently when I attempted to make an appointment with my doctor after I dislocated my shoulder. When I attemped to schedule a same day appointment, I got an error message:

That seemed reasonable, so I expanded the search to a week, and got an error message:

Perplexed, I expaned the search to three weeks, and got an error message:

Obviously, I had a time-sensitive problem and needed to be seen, so I called the appointment line, where the opperator informed me that my doctor was on vacation for the month, so obviously that's why I couldn't schedule the appointment. She then booked me an appointment with another doc, and then cheerfully reminded me that in the future I could perform most simple tasks such as appointment booking using the online portal. Too bad Kaiser's system doesn't make it visible when a doctor is on vacation, and even if they did, it's not possible (as far as I have been able to discern) to schedule appointments with other doctors without a referral. 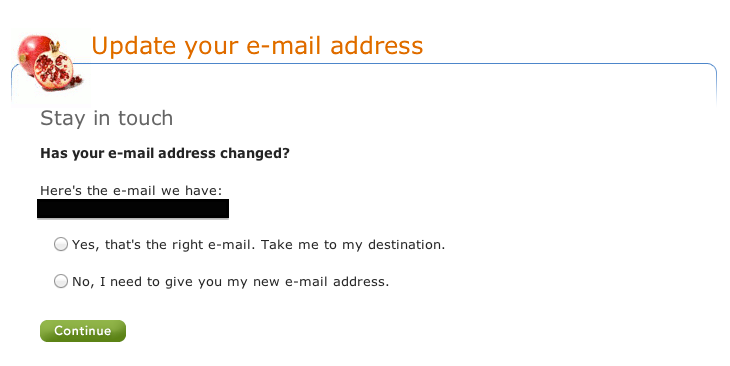 Yes, Kaiser my email changed, so the one you have is the right one. Who writes this stuff?